The sun powered down with an incandescent heat.

A swirling gust of wind raised a cloud of fine dust into my face. I lifted the palm of my hand to shield my eyes from the grit. When the dust settled, I squinted down the road hoping to see the bus making its way down the main highway out of town. A few jalopies rolled by but the bus was not in sight.

"Where is this damn...?" I grumbled to myself. "….Probably broken down somewhere."

Beside my feet was a woven nylon basket filled with vegetables from the open-air market. I had some spinach in reasonable condition which I bought from an aggressive lady who had called out to me as I walked by her stall. "What are you looking for?" she boomed in a laughing but forceful voice. As I stammered in surprise, she added, "You probably need vegetables."  She held up   a bundle of spinach in each hand. "I'll give you a good price."

Wordlessly, I walked to her and held my basket open as she placed her produce into it. "Are there any potatoes?" I asked as I paid her. 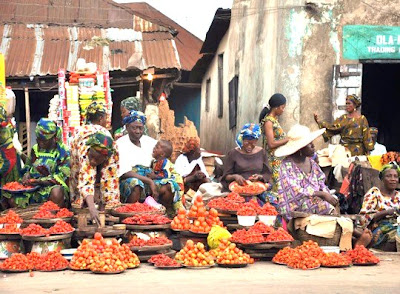 She told me of a shipment of potatoes that had just arrived and were being sold near the western wall by her cousin Alfred. I walked hurriedly along the rows of beans, tomatoes and mangoes to find Alfred before his potatoes were gone.

A harried Alfred weighed out customer orders and explained loudly that his potatoes had just come in fresh from Thompson Falls. I took my place in the line to buy them. The dry weather made them rare and pricey but I bought 3 kilograms because rice and maize were even higher .

I waited on. The afternoon air became still and silent.   Heat waves danced on the horizon making it look as though the asphalt road ended in a shimmering lake of blue water.

I surveyed the horizon towards the north. I could make out two dead cows where they lay by the road. They were stretched out on the brown soil with their ribs etched along their backs.

Somali nomads had recently driven their herds southwards through town desperate to get to the greener lands that lay on the slopes of the volcanic mountains. As the herds moved, the weaker animals fell and were left to the vultures along the way. The drought they were fleeing had burned their grazing zones into a wasteland of talcum powder.

"I should walk home." I thought.

I bent over and lifted the basket off the ground to test its weight. The thin leather straps cut into my fingers and I knew I would not be able to stand the pain after a kilometer or two. Eleven miles in the heat would be torturous especially with the awkward weight of the basket. I set it back down.

Across the road from me, a massive willow tree drooped heavily over a one-room regional clinic.  Its neatly trimmed lawn lay invitingly in the shade.

I decided to cross the road to continue my wait shielded from the sun. I grasped the handles of my basket but as I started to lift it, the faint grind of a motor echoed through the hot air. I strained to listen for the sound but it faded away and was gone. The bus did not rise from the watery mirage.

My lips were dry. I brushed a fly off my nose.

I glanced up at the sky and estimated that it was 2:00 . I had been standing at the bus stop since high noon.

I turned to look at the mud-walled houses that stood in crude rows behind me.


The blended smell of laundry detergent and sewage wafted by from the makeshift village. The roughly finished wooden doors and windows of the huts were closed against the heat. I tried to decide whether it would feel better to stand in the sun or to wait out the afternoon in one of the tin-roofed huts.

The shady patch under the giant willow called out to me again. As I touched the basket to heave it across the road, I heard a door close.

I looked up to see a man and a woman leaving the clinic. The woman clutched the man's arm. She was limping slightly as they  slowly crossed the road.

They got to the bus stop and halted a few meters from me. The man stared at me for a moment with bloodshot eyes. He was tall and dressed in a pale threadbare suit. The jacket hung off his shoulders like it would a wire coat hanger.

She was draped in a faded cotton cloth that covered her head and looped to the ground. She spoke in a strange rapid language that I didn't recognize. His replies were slow and even-toned. She gripped his arm tightly, trying to take some weight off her feet.

The old grey bus blustered up to where the three of us stood. The weary conductor casually opened the door to let us in and away from the inhospitable afternoon.

This is a true story?